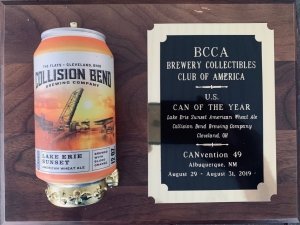 By Marc Bona, cleveland.com
CLEVELAND, Ohio – Collision Bend Brewing Co.’s Lake Erie Sunset has been named U.S. Can of the Year by the Brewery Collectibles Club of America.

The Lake Erie chapter nominated the can, which was the first beer to be canned by the Cleveland brewery. Lake Erie Sunset beat almost 50 entries submitted from all over the country.

“Very cool,” brewer Luke Purcell said when he heard the news. “I already called our designer.”

That designer is John Okal of Cleveland-based Epstein Design.

“I’m really excited about it,” Okal said about his first can design. “First I showed them a ton of cans when I designed it. They said ‘We want bright orange, we want it to pop off the shelf.’ I did a lot of variations, and this one stuck.”

Okal said he was “a nervous wreck” since it was his first can design.

“It better look good; it’s the first can for the company,” he said.

Collision Bend began canning the American Pale Wheat Ale last year. The beer, which is brewed with blood orange, is a smooth sipper with a fresh and very slightly sweet tinge. Its label depicts a bridge, rising vertically over the Cuyahoga River with the sun setting in the background. It’s appropriate, considering it’s the view from the brewery’s patio.

Okal said he has done four or five other cans – all with Collision Bend – including Hope Flows, a Kolsch, and 8 Crazy Nights, a spicy holiday ale.

Henry Senyak of the Lake Erie chapter submitted the can for consideration. It was fitting, considering he bought the first can that officially rolled off the line last year in the Flats East Bank brewery, Purcell said. The announcement came about a month ago at the BCCA’s national can-vention in Albuquerque.

Representatives from the local chapter are hoping to present the award to Collision Bend at an upcoming breweriana show, held Friday night, Oct. 11, through Sunday morning, Oct. 13, in Richfield. The swap-and-sale show focuses on all things beer – cans, signs, trays, openers and all sorts of memorabilia.