Behind the Brew: C-Town IPA 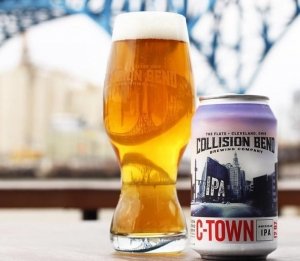 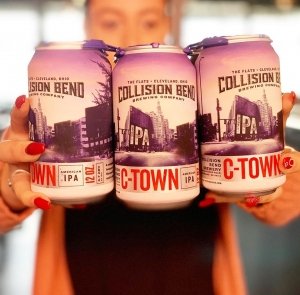 In our original lineup, we had our first IPA which was named East Bank IPA, after our side of the Cuyahoga down in the Cleveland Flats.  We made this one a few more times (like about 20!), before deciding that the recipe was right where we wanted it.  Upon being satisfied with the recipe, we decided start canning this IPA, thus letting more than just folks on the East Bank of the Flats in C-Town be able to enjoy it.

“C-Town!”, thought Brewer Ben, now that would be a cool name for a beer worthy of all of Cleveland and beyond!  Surprised that no one in town had used the name for a beer yet, we promptly renamed our IPA C-Town and began working on the label.  The original design we thought was cool featured the well-known billboard located in the heart of downtown.  Our only problem was figuring out what to put on it for the can.  After seeing about a dozen or so different ideas, someone from our crew said something about making sure people knew that there was IPA in the can.  Brilliant!  The beer is what it’s all about.  We immediately called our designer and asked to see a version with the letters IPA on the billboard.  Well, as you can see, this is the one that we felt fit perfectly!

We are proud to present this IPA to all of Cleveland and beyond.   We feel it is worthy of representing our brewery and our great town!

A complex malt blend offers up the perfect balance to this hoppy IPA. Centennial and Simcoe hops contribute citrusy aromas and a clean, bitter finish. Rock on C-Town!